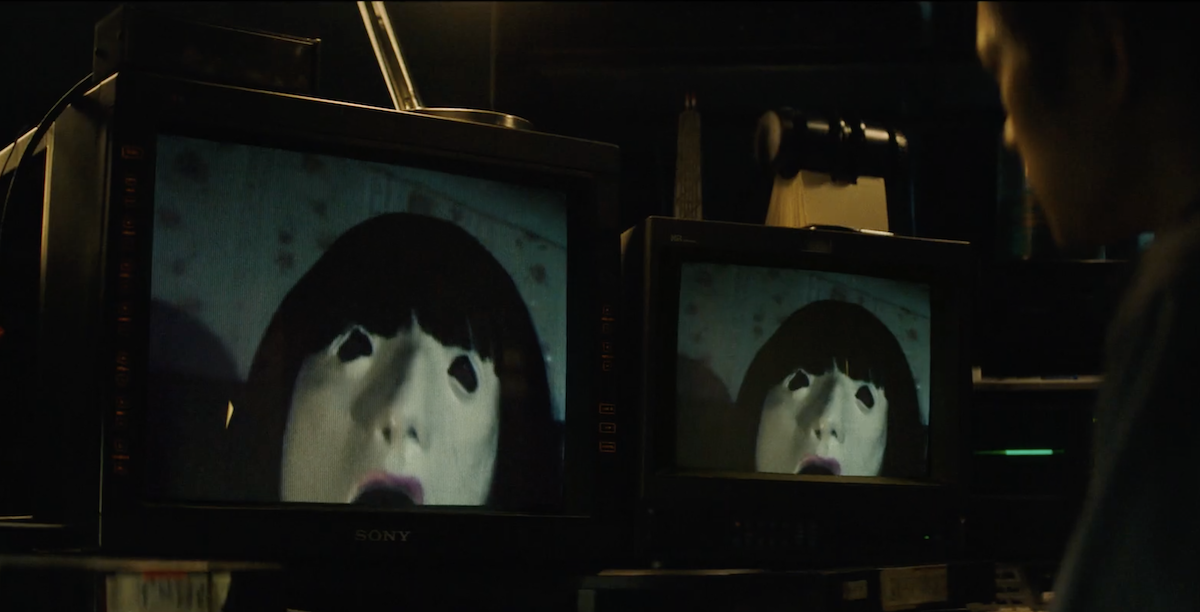 Ah three posts in a row about film! I must be in a mood.

Watched Broadcast Signal Intrustion (2021) last night, and while it had some brilliant ideas that kept me interested for its run-time, it suffers from the problem that a number of contemporary horror films with “cool ideas” suffer from–namely the fact that somehow these folks that can get it together enough to actually get a movie made have absolutely zero understanding of narrative; rather they just sort of understand empty signifiers of narrative, and so these very dope concepts they come up with end up sort of flattened out and boring, and totally unexplored.

I should note here, that when I say “narrative” I do not mean “plot.” I’m not that concerned with any sort of formalized vocab as I’m not an academic, but most of the time I differentiate between the two in the sense that, for me, narrative is akin to movement, whereas plot is akin to story. Do the two overlap? Of course. There’s no cut and dry separation, and the way I carry the two should certainly intercede one another when pulled off successfully. The biggest problem I see in many of these contemporary horror movies that actually have legitimately interesting ideas at their core is that they seem entirely uninterested in actually exploring the concepts they’ve come up with!

A perfect example of this is “The Possession of Michael King” (2014) which introduces a fucking amazing premise, which I’ve copied/pasted from Letterboxd to be more efficient: “Following the sudden death of his wife, Michael decides to make his next film about the search for the existence of the supernatural, making himself the center of the experiment – allowing demonologists, necromancers, and various practitioners of the occult to try the deepest and darkest spells and rituals they can find on him – in the hopes that when they fail, he’ll once and for all have proof that religion, spiritualism, and the paranormal are nothing more than myth.” So, pretty sweet concept, right? I thought so, and so imagine my disappointment when instead of allowing the narrative of the film to revel in the verisimilitude of discovery, the titular character gets possessed after like the second thing he tries and the last 70 minutes of the film are a typical possession story. Same shit different day — a movie which I can’t at the moment remember the title of for the life of me, but involves a reporter who gets involved with some sort of ‘underground fine dining’ scene and somehow in the course of two different “transgressive” meals goes from eating like…dangerous sushi to human meat, and again, we are treated to 70 minutes of cliche following 20 minutes of exploration.

To me this is a problem: I am more curious and excited by the unknown than I am about actually moving towards the “money shot.” I think of the films of Teo Hernandez and the way they are almost always so fascinating to me — Gerard Courant writes of Hernandez’s films that one of the things that makes his work stand out is how he spends time reveling in the moments that are often brushed past: Hernandez allows his camera to spend 30 minutes admiring and investigating how light filters through a crystal glass. I am interested in the quest for the thrust torwards the unknown: I want to spend time looking, I want to have to look hard, as, to return to cliche, the journey is more important than the destination. An empty phrase but extremely true!!! Broadcast Signal Intrusion is not quite as direct of an illustration of this problem then the aforementioned films, but there is a sense where our protagonist is supposedly obsessed with this case but we get very little indication of what he’s doing other than getting stressed out and making bad decisions: there is a 2 minute montage early on of him doing the barest amount of work to research the mystery before Outside Conflict arises and then every other break that he gets on the “case” comes from someone else doing the work.

And then the ending blows, completely. But what a fucking idea! And tonally, really actually hits upon the sort of Chicago-Snuff-Creepiness that you want something like this to hit on (while Videodrome is very much the better movie, the “video intrusions” in this film are way better done) — there’s even a perfect sort of James Fotopolous abjection aesthetic somehow accomplished!

I had the thought that there seem to be two directions that these non-wide-release contemporary horror movies tend to take when they are rooted in extremely interesting ideas; the route this movie takes, where there is the idea that is wonderfully constructed and then the rest of the film fails at virtually every level, and then there are the films that have more than one interesting idea and manage to string them together in a way that might not entirely amount to much but feels much more rewarding than this (I think examples of this “mode” of film would include Banshee Chapter (2013) and The Borderlands (also from 2013) — neither of which are masterpieces but both take their conceits way further than Broadcast Signal Intrustion, Posession of Michael King, or the cannibal fine dining movie I can’t remember the title of).

Anyway, I think I just get so worked up about this sort of thing because certain ideas make me very excited, and then when you can’t follow through on that excitement I feel like the idea is wasted. And with Tu Imagines Robinson fresh in my brain, I also think there’s very much a reality that most movies are overcomplicated with unnecessary conflict: to be stranded on a desert island is enough to explore, and if it’s not, you lack imagination. And this is cinema! I want imagination!