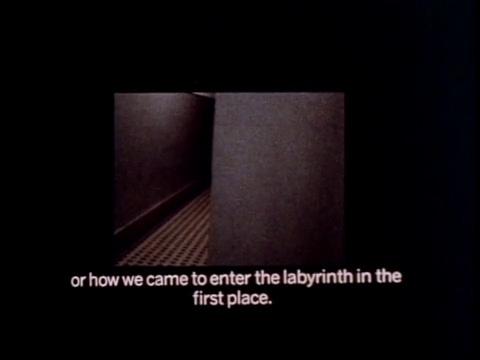 I have recently felt on the verge of a new articulation of both what it is about “movies” that I really respond to that also serves as a direction for what I think I want to accomplish with my movement. I have read Nicole Brenez’s article “Improvised Notes on French Expanded Cinema” probably five times since discovering it, and I have always responded to the excerpt I will quote before, but it really wasn’t until reading it now (in tangent with yet another re-reading of Roszak’s The Flicker of which more on that another time), where it really coalesced into something overpowering.

The part of the essay that I respond to most strongly is the following excerpt:

Three major tendencies coexist in the French tradition of expanded cinema. All three feed on rejecting the distinction between the symbolic and the real, and much of their activity centers on the possibility of short-circuiting the gap between the two spheres.

o The first tendency consists of a technical process of immersion. Cinema becomes a global environment where images are mobilized to invade bodies and minds. In this instance, the image refuses its condition as a local phenomenon and establishes itself as a concrete reality, in the manner of a temporal monument.

o The second tendency is a conceptual process of dematerialization. The image refuses its status as plastic object and turns into psychosomatic energy. In this case there is no reality other than that of the image, which is entirely conceived as a power of psychical investment.

o The third tendency is characterized by an out-of-body experience, a rapture, an ecstasy. The image refuses its condition as a reflection and becomes an acting out, or activity itself. In the course of the process, it takes upon itself the modification, the destruction, or even the replacement of the state of the real.

According to such practices (the main but not the only ones, by far), the work of art possesses a performative power, in the linguistic sense of the term. Performative art is not limited to its establishing of itself as event, be it speculative, visual, sonic, etc.: it asserts a capacity to alter its context. One may question whether this merely constitutes “magical thinking,” a transfer of worship practices into a profane, secular world. Conversely, the question arises of whether something more real, active, and complex than symbolic thinking actually occurs.

It strikes me as a very well articulated extension (in a different medium) of what Grotowski’s entire project was about (beyond the development of the self), though Brenez’s construction of course is predicated on a different “medium” (film vs theater, as even Grot would insist that theatre was the lens through which he was able to do his work). The bottom line here, I think, comes down to the idea of a work of art “assert[ing] a capacity to alter its context.” What is shocking is without wringing her hands about it Brenez is able to confront the expected doubt that follows that statement without seeming like she’s dismissing it or refusing to address it (which, in certain ways is the Grotowski approach).

As a quick aside, I feel like this works via a linguistic trick; I have spent years planning on learning more about NLP rather than actually bothing to learn anything about it, but I know enough to understand the way rhetorical questions can function in terms of being persuasive (hypnotism was also something Gurdjieff was heavily involved in studying while in Russia). The inherent thing about language is that ultimately it functions like experimental film: when it’s “performed” correctly there is as much happening in the way it is constructed as there is in the actual content it’s delivering. Which is all to say there is a meta-level where form precedes content, but not in the way that the history of 20th century visual art would imply…

I’m all over the place here, but I also watched a very early West German doc on Kenneth Anger this week which features some astonishing behind the scene footage of Anger (whose birthday it is today!) working on Lucifer Rising — but Anger articulates something in an interview that I thought was interesting. He states (I’m paraphrashing here) that “mysticism” is passive, while “magick” is active: mysticism is clearing out the self so the “forces of the universe” can act upon you, whereas magick is working to impose your will upon the universe. I don’t think Anger’s sentiment wraps everything up as cleanly as he thinks it does (a major point of contrast here is how much active work/training the holy actor performs/prepares in Grotowski’s way of thinking about the movement of energy), but the idea of “active” vs “passive” here is what I want to call up. When I say there is a level of form that eclipses content, this is not in consideration of plasticity (or like “process” art where the work is about how it came to be) but rather about what the work of art is actively doing. Brenez’s explanation of “performite work” in the excerpt above says this better than I have here, but the idea is to circle around the idea until it becomes clearer: “…the work of art possesses a performative power, in the linguistic sense of the term. Performative art is not limited to its establishing of itself as event, be it speculative, visual, sonic, etc.: it asserts a capacity to alter its context.”

In my interview after the release of Prelude to Trangression with Writing the Rapids podcast I dedicate quite a bit of time talking about how what’s important in my work is not the “narrative” or even “plastic” elements (I don’t use those terms) but rather it’s about this idea of communicating a sense of energy, the hope that the reader experiences something themselves rather than just a second hand empathetic “space.” It would be easier to say that what I try to do in writing and my book works is “perform.” This is the key to what often gets dismissed as unnecessary extralinguistic plastic elements (and it’s also how you can tell if the “experimental” nature of the work is mere windowdressing): if you are changing font sizes for the sake of changing font sizes then it’s tedious; if you are changing font sizes to let the shape of the text act upon the reader of the book for a specific reason, then, for me, that is a successful “performance.”

The space here is perhaps me just starting to work out further ideas, as clearly there’s no “main point” I’m seeking to arrive at. What’s nice about realizing you’re singularly focused is that the more active you are trying to figure out this singular focus, the more opportunities you get understand more deeply. This is why changing the vocab you use to talk about the same things actually demonstrates a more active rather than a passive approach to interrogation: if you decide on a vocab early on and force yourself to stick to that it means you’ve refused the potentiality that there is further to go….