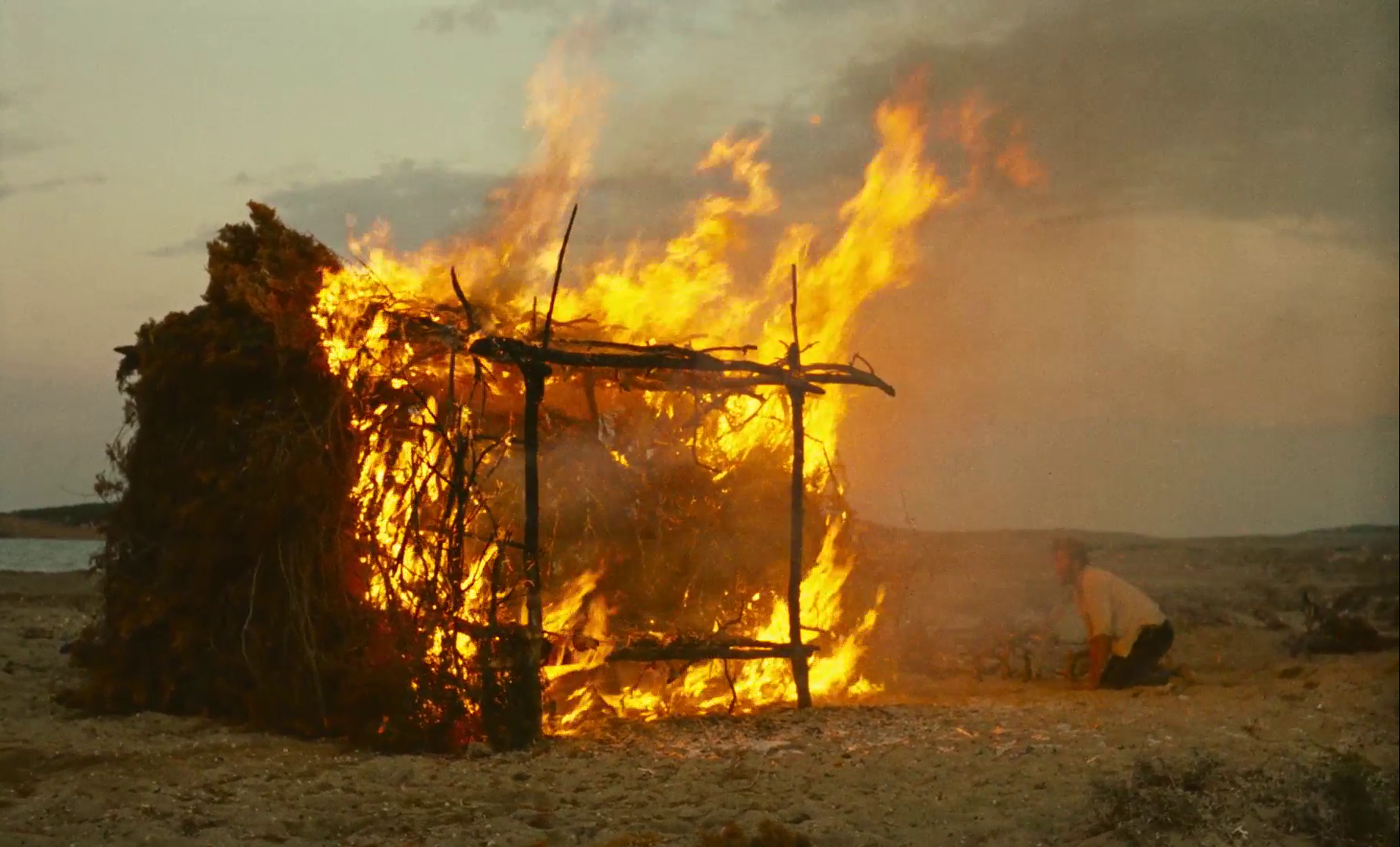 Subtitles for Pollet’s Tu Imagines Robinson were recently completed, so I was thrilled to be able to sit down and finally watch the film. I love Pollet’s work, but find myself especially inspired by his Mediterranean films, and as this was the only overtly Mediterranean film left to see, I’d been very interested in the film for a while.

I have, lately, found myself responding a bit lacklusterly to most of what I’ve been watching, preferring to listen to music instead of turn anything on. However, within the first five minutes of this film being on, I knew it was something I would cherish. The film functions, to me, perfectly as a transition between the more oblique essayistic poeticism of Méditerranée, Bassae and La Horla to the very post-68 film Le Sang (another film I love) and, I imagine though I haven’t actually watched it yet, Le maître du temps. I’m overlooking other titles in Pollet’s filmography in order to draw this chronology, but perhaps if I ever have a comprehensive overview the trajectory will still sit the same.

Being released in 1968, Tu Imagines Robinson feels extremely of the moment, and in fact reminded me of the Zanzibar films that I love — I feel like it would make a great pairing with Pommereulle’s Vite. In its use of location (an empty island) and “sets” (the credits refer to them as “objects”) there is a space of pure contemplation that to me feels charged with energy and inspiring; the only moment of the film I found myself slightly dissatisfied was when there is an implication that the isolation was driving our protagonist crazy — imagine running out of things to do in that environment! But my own response did not change how powerful I felt the film, how unrelenting prescient it is even now.

Most “desert island” stories posit an unnecessary development of conflict beyond the inherent “man versus himself” which, in my opinion, is way more than enough, so it’s refreshing to see that Pollet has no need to inject additional conflict. Survival and sanity is always enough, thank you, and there’s something refreshingly anti-capitalist about that idea (a refusal to insist that “plot” needs something MORE to be worthwhile).

The landscape and the “objects” here, the sea, all of this results in something so overwhelming to me… I have an obsession with Ettore Sottsass’s book/project Metaphors, I can get lost in Dieter Appelt’s hand-made architectural constructions of the 70s, I have a literal obsession with the land-divers of Melanesia…all of this circled my head within the narrative space of the film. The pictoral space. The sound design is to be applauded, and as usual in these 60s Pollet films, the poetry of the language is stark and direct and confusing in a way that makes me happy to be as involved with language as I have been throughout my life. The film reminds me that the way I want film to work best often involves a sort of absorption of myself into the film, a sort of emotive-corporeal reaction to the images before me. A sense of excitement and jouissance that doesn’t have to be linked to base or sovereign experiences…

Either way, it’s always extremely satisfying to be reminded that there are new works to be encountered.